The following is an extract from the documents recovered from the apartment of Karl Oskar Eklund:

Magic was from the earliest times largely developed by the Egyptians in relation both to the dead and the living. Under the former head fall both the pyramid texts and other texts found in the tombs, including most of the Book of the Dead, which consists mainly of magical invocations intended to make smooth the path of the deceased in the next world.

The demotic magical papyrus of London and Leiden was discovered at Thebes with other papyri, principally Greek but dealing with subjects of a like nature, in the early part of the last century, and was bought by Anastasi, who was at that time Swedish consul at Alexandria, and made a large collection of Egyptian MSS. When Anastasi obtained the MS. it must already have been torn into two parts, and it is even probable that he obtained the two parts at different times, since he sold his Egyptian collections, including the Leiden MS., to the Dutch government in 1828, while the London portion was bought at the sale of his later collections at Paris in 1857 for the British Museum (No. 1072 in Lenormant’s Catalogue). 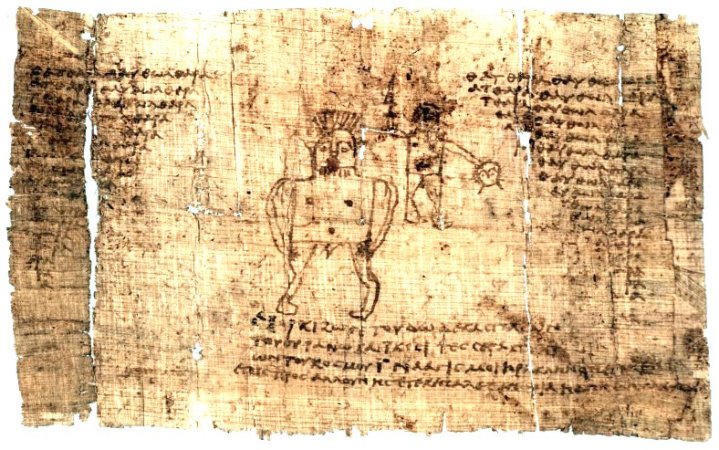 The Leiden fragment was made known to the world much earlier than that in the British Museum. Its importance for the deciphering of the demotic script by the help of the numerous glosses in Graeco-Coptic characters was at once perceived by the distinguished scholar Reuvens, at that time Director of the Leiden Museum of Antiquities, who proceeded to study it carefully, and in 1830 published an admirable essay 1 in which he sketched the principal contents of the MS. and indicated its value for the progress of demotic studies. He then took in hand its reproduction, and the MS. was lithographed in facsimile under his direction, and he had corrected the proofs of the first plate when he was cut off by a premature death in 1835; his work was carried to completion and published by his successor in the Directorship of the Museum, Leemans, in 1839 1. Heinrich Brugsch studied it closely, and drew from it most of the examples quoted in his Demotic Grammar published in 1855; but, although later scholars have frequently quoted from it and translated fragments of it, the MS. has hitherto remained without complete translation, commentary, or glossary.

The London MS., however, lay from 1857 onwards almost unnoticed in the British Museum. To the late Dr. Pleyte, Leemans’ successor at Leiden, belongs the credit of discovering that the two MSS. originally formed one. He had studied the Leiden portion, and at once recognized the handwriting of its fellow in London. Without publishing the fact, he communicated it to Professor Hess of Freiburg, when the latter was working in Leiden on the MS. there. Professor Hess went on to London, and, having fully confirmed Dr. Pleyte’s statement, published in 1892 a reproduction of the British Museum MS. with an introduction, including the translation of one column, and a glossary.

Magical invocations, among which occur the names of gods, spirits, and demons, Egyptian, Syrian, Jewish, strung together in a manner similar to those found in gnostic writings and on gnostic gems. He even went so far as to associate them with the name of a particular gnostic leader, Marcus, of the second century, chiefly on the ground of his recorded use of Hebrew and Syriac names in his invocations and the combinations of vowels. In consequence the MS. has acquired the name of the ‘Leiden Gnostic,’ and the term ‘Gnostic’ has been passed on to the London MS. But as will be seen from the complete translation here published, there is nothing in the work relating to the gnostic systems–it deals with magic and medicine, and it seems a misnomer to call the MS. gnostic merely because part of the stock-in-trade of the magician and medicine-man were a number of invocation names which he either picked up from the gnostics or derived from sources common to him and them. Hence it has been thought desirable to abandon the epithet ‘gnostic,’ and to call the work the ‘Magical papyrus of London and Leiden’.

You bring a table of olive-wood, having four legs, upon which no man on earth has ever sat, and put it, it being clean, beside you. When you wish to make an inquiry-of-god with it truthfully without falsehood, behold (this is) the manner of it. You put the table in a clean room in the midst of the place, it being near your head; you cover it with a tunic from its head to its feet, and you put four bricks under the table before it, one above another, there being a censer of clay before it (the table); and you put charcoal of olive-wood on it (the censer) and put wild-goose fat pounded with myrrh and qs-ankh  (stone) and make them into balls and put one on the brazier, and lay the remainder at your side, and pronounce this spell in Greek speech to it–Formula–and you spend, the night without speaking to any one on earth, and you lie down and you see the god in the likeness of a priest (clothes of byssus) wearing fine linen and wearing (a) sandals on his feet.

‘I invoke thee who art seated in the invisible darkness and who art in the midst of the great gods sinking and receiving the sun’s rays and sending forth the luminous goddess Neboutosoualeth, the great god Barzan Boubarzan Narzazouzan Barzabouzath, (the sun) Helios; send up to me this night thy archangel Zebourthaunen. Answer with truth, truthfully, without falsehood, without ambiguity concerning this matter, for I conjure thee by him who is seated in the flaming vesture on the silver head of the Agathodaemon, the almighty four-faced daemon, the highest darkling and soul-bringing PHOX; do not disregard me, but send up speedily in this night an injunction of the god.’ Say this three times.

‘Ho! I am Murai, Muribi, Babel, Baoth, Bamui, the great Agathodaemon, Muratho, the … form of soul that resteth above in the heaven of heavens, Tatot, Bouel, Mouihtahi, Lahi, Bolboel, I, Aa, Tat, Bouel, Yohel (bis),the first servant of the great god, he who giveth light exceedingly, the companion of the flame, he in whose mouth is the fire that is not quenched, the great god who is seated in the fire, he who is in the midst of the fire which is in the lake of heaven, in whose hand is the greatness and the power of god; reveal thyself to me here to-day in the fashion, of thy revelation to Moses which thou didst make upon the mountain, before whom thou thyself didst create darkness and light, I pray thee that thou reveal thyself to me here to-night and speak with me and give me answer in truth without falsehood; for I will glorify thee in Abydos, I will glorify thee in heaven before Phre, I will glorify thee before the Moon, I will glorify thee before him who is upon the throne, who is not destroyed, he of the great glory, Peten, Pater, Enphe, O god who is above heaven, in whose hand is the beautiful staff, who created deity, deity not having created him. Come down to me into the midst of this flame that is here before thee, thou of Boel,and let me see the business that I ask about to-night truly without falsehood. Let it be seen, let it be heard, O great god Sisihoout, otherwise said Armioouth, come in before me and give me answer to that which I shall ask about, truly without falsehood. O great god that is on the mountain of Atuki (of Gabaon), Khabaho, Takrtat, come in to me, let my eyes be opened to-night for any given thing that I shall ask about, truly without falsehood the voice of the Leasphot, Neblot … lilas.’

Seven times: and you lie down without speaking.

Akhremto, come in into the midst of this flame, to be opened to everything for which I pray here to-day, O great god that is upon the hill of <Atugi> Gabaon, Khabaho, Takrtat.’ You recite this until the light appear. When the light appears, you turn round, you recite this spell-copy a second time again. Behold the spell-copy also of the summons that you recite: ‘Ho! speak to me Thes, Tenor, the father of eternity without end, the god who is over the whole earth, Salkmo, Balkmo, Brak, Nephro, Bampre, Brias, Sarinter, Melikhriphs, Largnanes, Herephes, Mephrobrias, Pherka, Phexe, Diouphia, Marmareke, Laore-Krephie, may I see the answer to the inquiry on account of which I am here, may answer be made to me to everything about which I ask here to-day, truly without falsehood. Ho! Adael, Aphthe, Khokhomole, Hesenmigadon, Orthobaubo, Noere, Sere, Sere, San-kathara, Ereskhigal, Saggiste, Dodekakiste, Akrourobore, Kodere.’ You make him open his eyes and look at the lamp, and ask him as to that which you wish.’