Extract from the dairy of Karl Oskar Eklund: The Black Sun is a pagan symbol that predates Christianity. The cult of the black sun has no direct linear trace to legend or myth, but seems to have origins in the poetric Edda poem Völuspá. In stanza 41, the völva says:

The symbol of the black sun or Sonnenrad is a sunwheel for the “Black Sun” with origins in Germanic Zierscheibe (German for “ornamental disk”) an ornamental brooche from the Iron Age found in women’s graves and are thought to have been worn as pendants attached to the tunica, or as part of a belt pouch.

Early examples date to ca. 800 BC. with characteristic designs notably attested from Alamannic graves from the migration period. This symbol was adopted by the 5th SS Panzer Division“Wiking” – the SS division composed of Nordic countries.

During the 1920s, Karl Maria Wiligut wrote down 38 verses (out of a number purportedly exceeding 1,000), the so-called Halgarita Sprüche, that featured the black sun. He claimed to have memorized the verses as a child, taught by his father. Wiligut had designed his own “runic alphabet” for this purpose. Werner von Bülow and Emil Rüdiger of the Edda-Gesellschaft (Edda Society) translated and annotated these verses. They claimed that numbers 27 and 1818 are connected with the Black Sun. Verse number 27 according to Willigut is a 20,000 year old “solar blessing”:

Legend tells, that two Suns, two wholesome in change-rule UR and SUN, alike to the hourglass which turned upside down ever gives one of these the victory / The meaning of the divine errant wandering way / dross star in fire’s sphere became in fire-tongue revealed to the Earth-I-course of the race of Paradise / godwilling leaders lead to the weal through their care in universal course, what is visible and soon hidden, whence they led the imagination of mankind / polar in change-play, from UR to SUN in sacrificial service of waxing and waning, in holy fire Santur is ambiguously spent in sparks, but turns victorious to blessing.

Santur is interpreted as a burnt-out sun that was still visible at the time of Homer. Rüdiger speculated that this was the center of the solar system hundreds of millennia ago, and he imagines a fight between the new and the old Suns that was decided 330,000 years ago. Santur is seen as the source of power of the Hyperboreans.

In the epic of the tower of Babel. Nimrod was the son of Cush and grandson of Ham, founder of the city Babilu on the plain of Shinar, which means “Gate of God.” “Babel” is what the Hebrews called it, and thus when Moses, a Hebrew, wrote Genesis, he called it “Babel.” Babel is the Hebrew name which means “confusion.” At Babilu is found the following inscription:

White sun, beaming above the world earth – You give light of the day. Black sun, shining inside us – You give the power of knowledge. -Reflecting the kingdom of Atland, Which was high at the pillar of heaven Before the sea rage devoured it. Thinking of the wise giants, Who came and taught beyond Thule.

One thought on “The Black Sun” 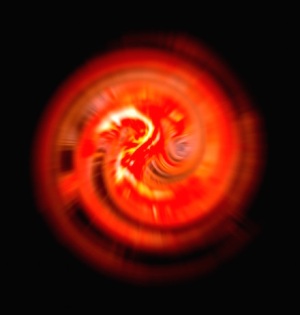